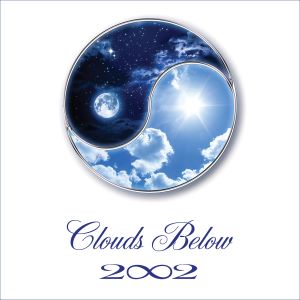 Clouds Below was inspired by opposites – contrary forces that depend upon each other to exist and evolve.
The sun above by day and the moon at night, share a magic moment when they briefly mingle before one
yields to the other. Clouds drift along regardless of day or night, and they appear below when we soar in an
airplane, climb above them on a mountain or chance to see them reflected in a pond. The songs on this
album explore the beauty found all around us, above and below. The music reveals unexpected paths,
inviting us to follow. The award-winning, progressive new age band 2002 has placed 12 albums on the Billboard Charts and made the list
of top new age artists in a Billboard Magazine “Year in Review” issue alongside Yanni, Mannheim Steamroller, Jim
Brickman, George Winston and Enya. Over their 30 year career, their ever-evolving sound has encompassed a wide
range of genres – from wistful ambient soundscapes all the way to light progressive rock. This daring blend of musical
styles has given them an undeniable “signature sound” that sets them apart from other recording artists.