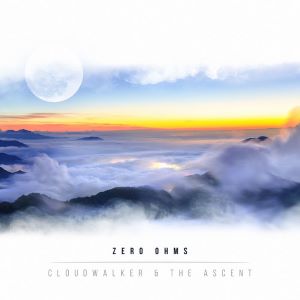 Just as the light of a full moon allows us to navigate a path through the darkness, Music allows
us to find our way in the dark nights of the Soul.”
— Zero Ohms, April 2022, Glen Ayre, NC USA.

Cloudwalker and the Ascent, the new release from Zero Ohms, is a mountain climb to higher consciousness from a master of electronic ambient music. The album flows seamlessly from valley-wide textures to meditative flute melodies and back again; on Cloudwalker and the Ascent, Richard Roberts, the composer behind Zero Ohms, uses improvisation to celebrate exploration and meditation. The result is serene and cinematic, intimate and soaring.

Inspired by Roberts’ recent move to the mountains, Cloudwalker and the Ascent was composed in western North Carolina, amongst some of the highest peaks east of the Mississippi river. Each morning, he set out to hike the highest peak. Up there, the clouds hung so close to the earth he walked through them. One of Roberts’ friends nicknamed him “Cloudwalker,” and the album’s concept was born. Roberts found serenity in those solitary, cloud-cloaked climbs. With Cloudwalker and the Ascent, he has recreated that space for the listener. These seven pieces are an ode to that vastness, to those moments on the mountainside when all is distance and only the climb is close.

On “Unknownland,” Roberts’ flute winds through a landscape of birdsong and birch, the sonic image of a summer breeze. Vibrato becomes contemplation and a sense of resting, taking in the sights and sounds of the forest. “Vistas Beyond” recalls the interstellar atmosphere of Broken Stars Through Brilliant Clouds, his collaboration with Numina. Subtle chimes ebb and flow around a far away drone. Mystery pervades this piece, both ominous and enticing. The stunning finale “Across the Seven Skies” finds Roberts’ flute at its most dazzling. Here, classical trills entwine with ornate eastern melodies as the piece builds to a chorus of yearning highs.

Cloudwalker and the Ascent is a serene landscape that invites exploration, and a celebration of the meditation one can find when alone in a beautiful place.