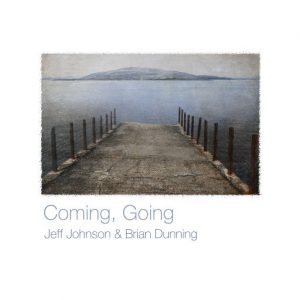 Scroll down and click on photo for Jeff’s Bandcamp page.

Coming, Going is a new retrospective compilation from the
acclaimed Contemporary Celtic duo, Jeff Johnson and Brian
Dunning. Featuring a brand new track and thirty-one pastsongs,
Coming, Going highlightsthe duo’sthirty plus year musical
collaboration.
Johnson and Dunning were well known in the Contemporary Celtic
music genre having released the trilogy, Songs From Albion (1992 –
94), The Bard and the Warrior (1997), Byzantium (2000), Patrick
(2003), King Raven (2008) and Eirlandia (2018) which have all been
tied into the Celtic Fantasy stories by best-selling author, Stephen R.
Lawhead.
Their music has been included on contemporary instrumental
compilationsreleased by Windham Hill (Celtic Christmas, Winter
Solstice) and Hearts of Space (Celtic Twilight), and on soundtracks
for documentary and feature films, including Martin Scorsese’s
Gangs of New York.
They’ve released a string of popular Celtic Christmas CDsincluding A
Quiet Knowing Christmas(2001), Starsin the Morning East (2005)
and Under the Wonder Sky (2010) along with three beautiful Celtic
chamber group releases with violinist, Wendy Goodwin including
Winterfold (2013), If I Do Not Remember…(2016) and Kohelet
(2020) 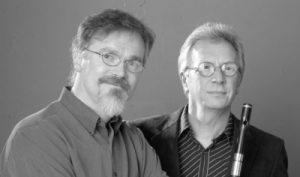 Jeff Johnson grew up outside Portland, Oregon where he worked as a jingle writer and part time sound engineer. In
1977, he built a small studio in his home and started his own record company, Ark Records. His early work, including
Shadow Play (1983), Fallen Splendor (1986), Great Romantics (1991) and The Isle of Dreams (1994), were vocal
progressive-rock with jazz and new age elements. He also released a series of contemporary instrumental albums
including No Shadow of Turning (1985) and Born of Water (1987) with jazz bass legend, David Friesen and
saxophonist, Dave Hagelganz.
His later solo work is infused with Celtic and contemplative spiritual influences. These include Vespers (2005), Prayers
of St. Brendan (1998), A Thin Silence (2006), Broken, Gazing (2014), Lauds (2020) and his most recent work, Caim
(2022) with soprano, Janet Marie Chvatal. Chvatal was also part of Johnson’s Coram Deo Ensemble (Antiphon) which
included Brian Dunning, Wendy Goodwin and Marc Gremm. The group performed in venues in Europe including
Neuschwanstein Castle. These albums reflect his work with Selah, a contemplative worship service he presents in
many churches, Christian retreat centers and with pilgrimage groups.
Jeff has also recorded a critically acclaimed instrumental series with guitar virtuoso, Phil Keaggy which includes Frio
Suite (2009), WaterSky (2012), Cappadocia (2018) and Ravenna (2021).
He lives with his wife, Susie, on Camano Island, Washington.
Brian Dunning was a native of Dublin’s Stoneybatter, where he grew up alongside jazz vocalist Honor Heffernan.
Dunning was a pioneer of Irish jazz and one of the first to attempt a fusion between jazz and Irish traditional music.
After studies in Ireland with the classical flautist James Galway, Dunning was the first Irish jazz musician to study at
the prestigious Berklee College of Music in Boston in the late 1970s. He stayed on in the US and built a career there in
the 1980s and early 1990s, performing with the band Nightnoise. The band, which also featured guitarist and Bothy
Band founder Mícheál Ó Domhnaill and singer Tríona Ní Dhomhnaill, recorded a string of well-received albums for
Windham Hill Records, including Something of Time (1987), Shadow of Time (1993) and A Different Shore (1995).
Dunning’s own band, Puck Fair, enjoyed two incarnations, the first in New York in the 1980s with Mícheál Ó
Domhnaill and percussionist Tommy Hayes. When Dunning returned to Ireland in 1996, he reformed Puck Fair, this
time with guitarist Sean Whelan and percussionist Robbie Harris, releasing the critically acclaimed album Forgotten
Carnival (2008).
Brian’s last solo recording was Blue Sphere Motifs (2017) with Paul Moore and Robby Harris. He died February 10,
2022, age 70 and is survived by his wife, Fiona and sons, Gord, Jack and Jules