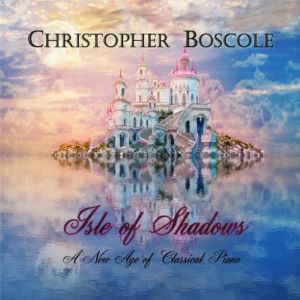 Performed live and recorded by Christopher Boscole
at hisstudio in Kauai, Boscole has produced a new
album continuing in the series of A New Age of
Classical Piano – Isle of Shadows. This album
features 11 arrangements ofsome traditional
classics as well assome lesser-known selections,such
asthe album title track “Isle of Shadows” by Selim
Palmgren, a Finnish composer. The album concludes
with a Boscole original “Until We Meet Again”. 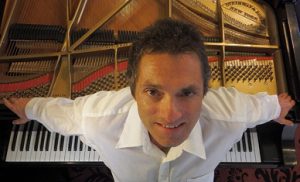 Isle of Shadows will be
streamed on all major platforms

Pianist and composer Christopher Boscole hasreleased thirteen albums of inspirational and uplifting
piano music. New Age, Classical, Neoclassical, Ambient, Jazz, Piano, Easy Listening, Melodic, Happy,
Modern impressionist piano music that isrelaxing and meditative. Boscole grew up in a musical
household as his mother was a singer and piano teacher. He studied violin, viola, clarinet,saxophone,
and piano – later with classical pianist Mikiko Miyamoto. Christopher played in school jazz groups and
later pop music and rock n roll as he worked as a pianist/accompanist and keyboardist in a variety of
bandsin Seattle. He studied privately with jazz artist Gary Peacock and also continued music studies
at Edmonds Community College and the University of Washington achieving a Bachelor of Artsin
Music – Classical Piano and later a Master of Music in Studio Music and Jazz Piano Performance from
the University of Miami where he was also was a teacher. In his early career, Christopher produced five
albums: Shimmer, September Song, Land of Music, O Christmas Tree, and Natural Instincts. In the
following years, Boscole took a break from recording and focused on raising a family while working as a
teacher and musician. In 2008 he took a sabbatical and sailed to Hawaii and released Presents of
Angels and Inner Voyages. Christopher then returned to teaching in Seattle and later produced
Floating on a Melody in 2012. The next year Boscole retired from teaching and sailed back to Hawaii
and released A New Age of Classical piano in 2014. This wasfollowed by Skipping on Daisiesin 2016
and Soul Dreamsin 2017. Christopher released Dawn of Love in 2019, a collection of classic love
themes and 2 originals. Now in 2022 Boscole releasesIsle of Shadows- A New Age of Classical Piano.
Christopher is also featured on several compilation albums: Whisperings Solo Piano I, In the Zone Vol
1, and Focus Zone Music for Studying. Christopher also combines his passionsfor music, nature,
photography, and sailing in music videosfound on Youtube.