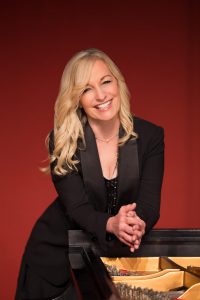 Considered one of the most distinctive composers and pianists in jazz today, Lisa Hilton’s compositions draw on classical traditions, twentieth century modernists, and the avant-garde as much as they look back to icons of American jazz and blues. Hilton notes, “The role of composers today is to create a body of work that represents the sound and energy of our lives in the twenty first century while still embracing our rich musical inheritance. I’ve only seen the New York that inspired Gershwin in movies – today our world looks, sounds and feels completely different. At the same time, technology allows us to access the entire history of music at the touch of a finger. Music today can reflect these expansive experiences.” Hilton’s post bop style influences extend beyond jazz legends Thelonious Monk, Count Basie and Duke Ellington, to include bluesman Muddy Waters, minimalists like Steve Reich, current rockers Green Day or modernists Prokofiev, Stravinsky and Bartok.

Originally from a small town on California’s central coast, Hilton studied classical and twentieth century piano formally from the age of eight, but in college, switched majors and received a degree in art. “I approach music as my art now,” Hilton explains; “I build the composition with the musical elements – melody, rhythm, form, then ‘paint’ texture and color through harmony, improvisation, density and other concepts”.

Working with top engineers, Hilton has produced a total of sixteen albums, representing 200 iTunes tracks through her publishing company.Known for her warmth and leadership on the stage, Hilton has played venues coast to coast and has worked with many of this era’s jazz luminaries, notably Christian McBride, Nasheet Waits, Rudy Royston, Steve Wilson, Jeremy Pelt, Lewis Nash, Billy Hart, and Bobby Militello of the Dave Brubeck Quartet among others. Her current release, “Kaleidoscope,” was recorded with Larry Grenadier, Marcus Gilmore and J.D. Allen. Her sixteen releases have appeared on international radio charts year after year and have been heard on hundreds of radio stations around the world – including syndicated programs like NPR’s popular Morning Edition, and have received numerous awards, honors and recognition. In addition, Hilton has been featured on CBS/Boston and WGN/Chicago, and has been included in the books: “The New Face of Jazz” by Cicily Janus, (Random House (2010),and “Viaggi nell’armonia delle note,” by Silvia Cinzia Turrin, (Atti Poetici 2013). Hilton is a BMI member and a voting member of NMPA and NARAS, (Producers & Engineers wing).

Committed to helping students who are often overlooked, Hilton regularly spends time to help young blind musicians at the historic Perkins School for the Blind in Boston, The Chicago Lighthouse for People Who are Blind or Visually Impaired, The Junior Blind of America in Los Angeles, Camp Bloomfield for the Blind in Malibu, California, or with The Berklee College of Music in Boston and their adaptive music lab for visually impaired musicians. “I enjoy extending help to those with physical disabilities – music should be for everyone,” Hilton explains.