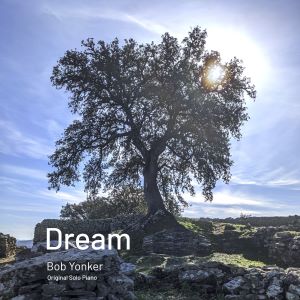 Bob Yonker’s 6th, and latest, album, Dream, is
comprised ofsongs composed to bring calm and
joy and maybe even emotional healing to the
listener. Several of the pieces were inspired by
Bob’s move to Europe with his wife Karen.

Bob Yonker createssolo piano music with the
intent of calming the mind,soothing the soul, and
healing the planet one note at a time. 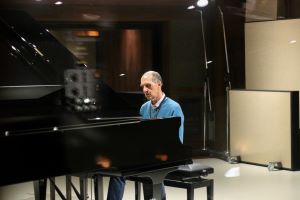 Recorded at Arda Recorders, Porto, Portugal
Sound Engineers: Barbara Santos, Lead Engineer
Mastering: Jason Shaffer, Full-Tilt Productions,
Mechanicsburg, PA
Cover Photo: Karen Klavuhn
Dedication: As always, this album is dedicated to
my wife Karen whose love, kindness, and patience
with me is a blessing and an inspiration for me to
pursue my passion for creating original music.

Bob’s music can be purchased on
Amazon, iTunes, and Bandcamp
and can be heard on allstreaming
platformsincluding Spotify, Apple
Music, Sirius XM, and Pandora

Bob Yonker createssolo piano music with the intent of calming the mind,soothing the soul, and healing
the planet one note at a time.
Growing up in the northeast, Yonker’s earliest musical memory is of his mothersinging and playing the
piano in his childhood home. He can remember his curiosity while watching her play and was always
fascinated by the sounds created by the piano and how it worked.
At the age of 4, he began piano lessons, but after a year, histeacher realized that Bob was playing by ear
and not reading the notes. Bob had had hissister play the song for him and Bob would then learn it by
listening, and was“found out” after playing his piece for a recital in the wrong key. He later did learn how
to read, but has always been more comfortable playing his own style and his own compositions best.
Being told by collegesthat hisstyle of music was not what they were looking for without classical training,
Bob decided to change career paths and received a degree in agriculturalscience from Penn state, and
worked many years helping the environment, while working second jobsin group homesfor the mentally
challenged, which he enjoyed immensely, as well as being the organist for his hometown church.
In the 90’s, while still working full-time, Bob went back to school and received a triple degree in Special
Education, Elementary Education, and Early Childhood Education, which allowed him to switch career
paths once again to become a special needsteacher.
Now “re-passioned” from histeaching career, Bob hasreturned to hisfirst love – music – and has composed
6 albums of contemplative, contemporary, and meditative solo piano music. Many of hisformer coworkers and friends continue to use his music in their office or classroomsto help theirstudentsstudy,
focus and concentrate.