JJ Rey (Ambiente Solstice, Cloud Runner) is an Austin, Texas-based multi-instrumentalist and electronic composer who focuses on ambient compositions. He has explored many musical arenas, from big-band jazz to electronic genres ranging from downtempo to deep house to drum ‘n’ bass and dubstep. Ambiente Solstice plays the saxophone, favoring the soprano sax. He also plays “keys,” identifying as a keyboardist before identifying as a pianist. Though his music takes inspiration from a world of sounds, Rey cites his most important influences as Vangelis, Steve 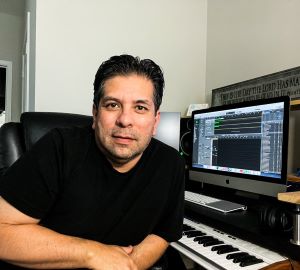 Growing up in the 1970s and ’80s, Rey recalls hearing “Baker Street” by Gerry Rafferty
on the radio during a drive with his brothers—he decided on the spot to learn the saxophone. The hits of the ’80s, as well as his time in jazz orchestras, would be the soundtrack of his early artistic education and Rey looks back on this era as “the best music ever. Heavy metal, new wave, punk, jazz, electronic, etc. I loved them all.” It was not until high school, however, that Rey found electronic music. So recalls the artist: “I discovered electronic music when I found a college radio station airing ‘Hearts of Space.’ I still remember the program title and number.”

With each release, the artist seeks to connect directly with the listener and to create a symbiotic relationship between artist and audience such that the line dividing the two is blurred; such that each musical step taken is anticipated by all sharing this auditory experience.