The songs on Here Now each express miraclesthat are all
around us every day, if only we would take a moment to
appreciate them. Bringing an opportunity to pause, to be fully
present and to experience the mystery of the moment, the four
songs on this EP: Fibonacci Sequence, Here Now, A Prayer for
Peace and Ancient Winds are varied and enchanting. With
Julie’s uniquely peaceful and graceful piano style, we hope these
songs are a respite from a busy world. 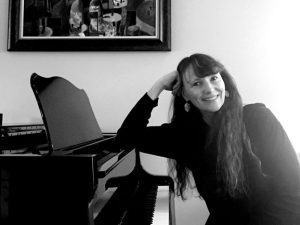 Julie Hanney is an Oregon-based pianist who composes and performs music that is unique,
emotional, and invokes a deep sense of peace. Her grandmother was a piano teacher who
introduced Julie to the piano at the age of five. This sparked a passion for music and she began
writing her own music just a few years later. Her piano compositions have been described as
peaceful, yet intriguing. One reviewer said she is “a delightful combination of George Winston meets
Erik Satie.” This truly compliments Julie’s ability to compose and perform music that both inspires
and soothes. Another reviewer said,”Expressive without being pretentious or needlessly flashy,
Julie’s music is performance with an aura – one which will emotionally move you in many ways.” Her
style is a blend of neoclassical, new age, relaxing jazz, and romantic. Releasing several EPs and an
album on Heart Dance Records in 2022-2023, her new songs communicate different”everyday
miracles”that exist all around us, if only we would take a moment to notice. From birds taking flight
to synchronicities to the perfect spiral of a pinecone… miracles abound for those with the ability to
stop and perceive them.
Where the Ocean Meets the Sky was released on Heart Dance Records in January 2021. Her
intention is that these songs impart a sense of rest, wonder, peace, and healing. Songs from this
album have won awards and have been heard on Sirius XM radio, international airlines, and radio
stations around the world. Her music has well over a million streams on Spotify. Julie created an
ongoing series titled “Peace Through Music” with other musical artists. When not making music she
enjoys kayaking, hiking, camping, playing with her dogs, reading, writing, and exploring the world.