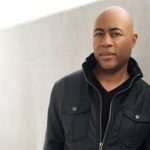 Pianist, composer, vocalist and arranger John Fluker – who has a string of credits backing such R&B notables as Gladys Knight, Dionne Warwick and Oleta Adams returns to the contemporary instrumental music scene with his highly anticipated contemporary piano album STAR EYES. Most of the instrumental piano tracks are beautifully enhanced with strings, pads and light ambient sounds while others are refreshingly solo piano. John Fluker’s music is known to have a calming effect as well as to stimulate concentration. This CD is no exception. His two previous successful albums include THE SOUND OF PEACE and J IS FOR JOY. The SOUND OF PEACE held the #1 position on two consecutive national New Age Reporter top 100-radio airplay charts. John also received the 2006 NAR Lifestyle Award for Best New Artist. Fluker’s Christmas CD J IS FOR JOY received a nomination for the NAR Best Holiday Album for 2007. It includes his interpretation of traditional Christmas songs as well as one original piece.

Fluker has worked extensively with legendary singer Gladys Knight. For several years, he served not only as her piano accompanist, but also as her musical director. Some of the highlights of working with Knight include John penning several songs for her musical “Madame Lilly,”, accompanying Knight on piano and the Mormon Tabernacle Choir in Utah, and performing at the televised 2006 Nobel Peace Prize concert with a full symphony orchestra. In addition, Fluker performed on and co-directed the Grammy Award Winning, ONE VOICE featuring Gladys Knight and the Saints Unified Voices. Additionally, Fluker sang a duet with Gladys on “Did You Know,”, played piano and arranged various hymns on THE VOICE OF CHRISTMAS.

John Fluker has also performed and arranged for various television shows. On the reality show “SINBAD It’s Just Family,”, he provided musical accompaniment for Sinbad and his daughter Paige Bryant on the keyboard. For the show 90210 Fluker arranged several musical selections for the inspirational vocal ensemble. Cast lead, Tristan Wilds, sang Fluker’s arrangement of “Amazing Grace,” on the episode entitled “Hello, Goodbye, Amen,”. John Fluker arranged the music and played the role of the choir director on the hit television series, “Everybody Hates Chris,”, on the episode entitled, “Everybody Hates Easter,”. Recently Fluker also appeared on the TVOne Hit series, “Love That Girl,” starring Tatyana Ali, in the episode entitled “Torture,” Fluker sang and had a speaking role as a member and lead of an A cappella vocal group.

Fluker is a talented vocalist who won multiple times on Ed McMahon’s “Star Search,” in the Best Male Vocalist category. John also works as a vocal coach (and is featured in Seth Riggs’ book “Signing for the Stars,”) with clients including Jennifer Lopez, Roselyn Sanchez (“Rush Hour 2,”), Devon Aoki (“Sin City,”, “Fast and the Furious,”) Kim Fields, May Hart, Florence La Rue (The Fifth Dimension), and Shawn King (Larry King’s Wife). Fluker co-wrote the music for “Parley Pratt’s Great Escape,,” a stage musical, and he co-produced the soundtrack recording as well. He is also a member of the Doo Wop group THE MIGHTY ECHOES where he sings second tenor. John was a featured pianist and vocalist for the Holland America Line Cruise Ships.

John began his formal piano lessons at age 8, he also learned trombone and played in his junior high, and senior high bands, as well as the school jazz band. He attended the University of Michigan, School of Music, where he graduated with a Bachelor’s Degree in Music Theory. During College, John sang in the University Chorale and Men’s Glee Club, studied dance and acting, and sang in talent shows and Gospel Concerts.

“My life is about sharing my musical knowledge, using my talents to help other performers create inspiring music, and now sharing my own music with the public in hopes that it brings them pleasure and a sense of peace.,”